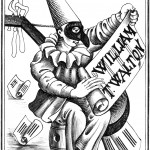 The text on this page, has been taken from “Walton – A Celebration – 2002”, published by William Walton Trust, March 2000. A comprehensive guide to Walton at the Centenary of his birth: the man, his music and the development of his legacy.

The William Walton Trust holds a special position in the United Kingdom, achieved through the active role which the Trust plays in running arts education projects and its support of the promotion of British music. Since its formation in 1984 the work of the Trust has steadily increased; the summer masterclasses in Ischia have become an annual event, and complement the education and community projects in the United Kingdom. In addition, The Trust supports the promotion of Walton’s music throughout the world, by offering advice, information and marketing support, and by ensuring that, particularly the less established Walton works, are accessible to the widest possible audience. The United Kingdom Trust was established alongside the Italian Walton Fondazione, which is responsible for running the house, gardens and masterclasses on Ischia. Since 1990 the Trust has been managed by Artistic Director Stephannie Williams in close collaboration with Lady Walton.

One of the earliest Trust projects was the recording of the complete works for Chandos. The resulting set, completed in 1995 with the Opera North production of Troilus & Cressida, is an invaluable asset for the promotion of Walton’s music around the world. The Trust has also been instrumental in the preparation of performing editions of works that would otherwise not be seen on today’s concert platform. Christopher Palmer’s arrangements, which include the early String Quartet and scenarios from the film scores for As You Like It and Olivier’s Hamlet, Henry V and Richard III have allowed the music to be heard by a much wider public.

Sir William Walton was born and grew up in Oldham, and the Trust has been actively involved in the annual Oldham Walton Festival since its inception in 1993. Events ranging from symphony concerts to guitar recitals and tea dances are crammed into an intense weekend. The festival has become a scene of pilgrimage for the Walton faithful by presenting many premieres of previously unknown works alongside the standard repertoire. There is a flourishing ‘Friends’ organisation, which has the weekend as the focal point of its activities. Each year the festival has focussed on a different aspect of Walton’s legacy; Music Ho!, the 1998 Festival, featured early works from the 1920s, while the 1999 Festival, In the South, explored the Italian connection.

In 1990, an official Walton archive was established at Ischia comprising letters, photographs, manuscripts and memorabilia, as well as Sir William’s personal record and score collections. The archive now offers a major resource to both scholars and enthusiasts, and complements the collection of autograph scores held at Yale University and the collection of correspondence with the publisher held in the Oxford University Press archives. The archive was particularly invaluable in the preparation of the scores of the new William Walton Edition by Oxford University Press and of the Opera North version of Troilus and Cressida, which reinstated many of the cuts made by Sir William for the Royal Opera production in 1976. The archive is housed in a small room adjacent to the Recital Hall at La Mortella but only a fraction of the material is currently on permanent display. The collection is continually updated as further material comes to light and is ever evolving. Like La Mortella itself, which has evolved from a barren stone quarry to a rich tropical garden, the archive has been a work of love supported by careful long-term planning.

The Trust is supported a number of publications that have drawn upon the resources housed at La Mortella.

Most notably, these include Lady Walton’s guide to the gardens at La Mortella and Pot Pourri – A Layman’s Guide to Walton by Michael Aston. The Trust is supported the development of two publications which were released in advance of the Centenary celebrations in 2002: Oxford University Press published Humphrey Burton and Maureen Murray’s Sir William Walton – A Life In Pictures, and Selected Letters of Sir William Walton, edited by Malcolm Hayes, was published by Faber & Faber.

In recent years, the Walton Trust has become involved in music education projects with schools in the United Kingdom. Many of these projects have been generously supported by PowerGen, which began an on-going association with the Trust in 1995 by sponsoring a series of concerts across the country. Subsequently, education projects became the focus of a relationship that has secured investment in the arts while also promoting Walton’s music to a new, younger generation.

The collaboration with PowerGen specifically aimed to facilitate creative music making in schools that have little music provision. An early project with the City of Birmingham Symphony Orchestra worked on Walton’s Henry V, in a special school with no history of participatory music. As a result of the project, the school now engages a music worker one-day a week. In 1998 the Trust ran a project in conjunction with the Royal Liverpool Philharmonic Society and the Liverpool Institute for the Performing Arts supported by PowerGen. The project, which involved 11,000 school children from around Liverpool, North Wales and Cheshire was entitled ‘Adventures in Music’ and explored themes of journeys and travelling. Music from the Christopher Columbus Suite was the starting point for pupils, who went on to compose their own musical journeys.

The culmination of the project was a week-long residency by the Royal Liverpool Philharmonic Orchestra in the Philharmonic Hall, during which all the participating schools heard them perform. Subsequently some of the schools returned to the Hall to perform the works that they had themselves composed. Walton’s music has proved ideal for education work in the United Kingdom as he is a home-grown composer, whose music often has strong connections with film and with narrative; links which have been used to offer young people an opening into a new world of experience. During 1999 the Trust was involved in education projects in Hertfordshire and Kent with the City of London Sinfonia, with the Royal Philharmonic Orchestra in Nottingham and in Coventry at the Belgrade Theatre. This work continues in 2000.

The Trust led the strategic planning of the Centenary celebrations for 2002, when many arts organisations took a Walton theme and the music featured strongly in the broadcast media, in festivals and in concert series. One of the opening concerts of the celebrations was given by the London Symphony Orchestra at the Barbican. The nucleus of a South Bank Festival was a cycle of the major orchestral works with the Philharmonia conducted by Richard Hickox, while smaller events filled the many exhibition spaces, halls and theatres on the South Bank. The Festival reached a climax on 29th March, the date of Sir William’s birth. The major orchestral concerts were performed at Symphony Hall in Birmingham. The Centenary was marked in Oxford where Walton was educated: Christ Church, Oxford Bach Choir and Oxford University Press presented events that included an exhibition of the Cecil Beaton collection of photographs of Walton and the Sitwells, currently housed at Christ Church Cathedral School.

The Oldham Festival, during the autumn of 2002, formed part of a much wider Northern celebration. Performances by the major Northern orchestras, ensembles and choirs, were accompanied by Opera North’s concert performances of Troilus and Cressida which opened the Festival in Leeds, and brought down the final curtain in Manchester. The programme also included a production of The Bear, and was the first occasion that both Walton’s operas have been seen in the same festival.

The Centenary celebrations offered an unparalleled opportunity to assess Walton’s influence on the twentieth century. As a new century continues, the Trust will continue to develop education projects in schools and communities throughout the United Kingdom, and in so doing will strive to build an audience that will ensure the continuation of a vital lega.